What is Quid Pro Quo and How to Deal with It 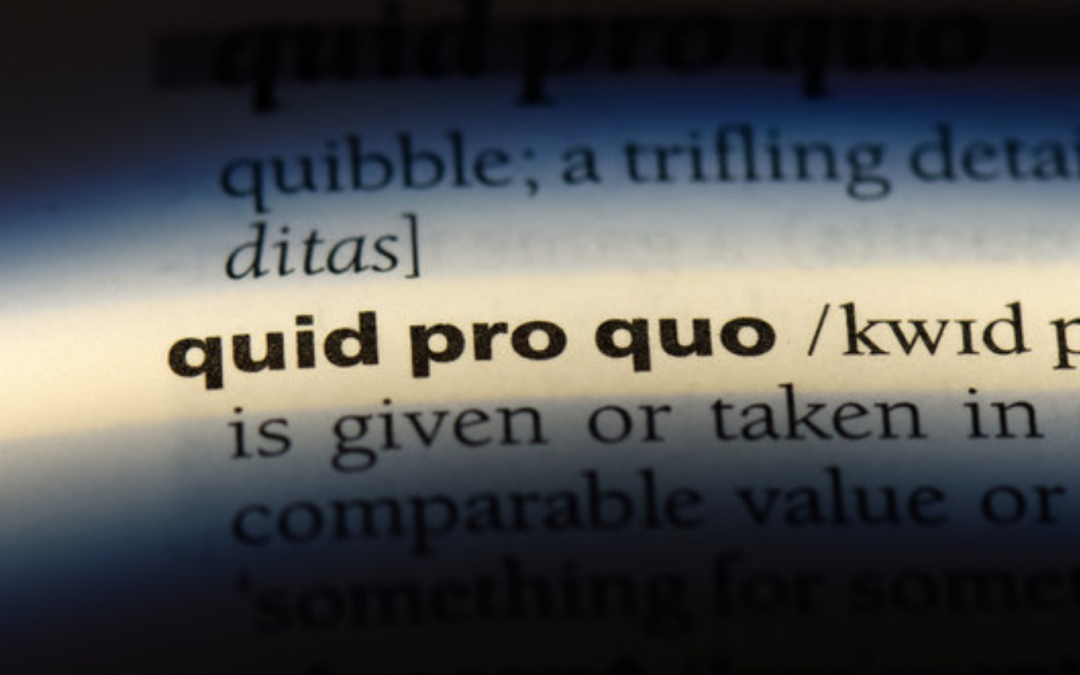 There is an excellent chance that you have heard the term ‘quid pro quo’ at some point in your life. It’s even made its way into pop culture, and as a result, you’ve probably wondered exactly what it means. Translated directly from the original Latin, Quid pro quo means ‘something for something.’

It originated in Europe during the middle ages and was used to describe a situation where two mutual parties would make an agreed transaction. As you can imagine, these agreements would often involve an exchange of services or goods.

These days it can actually amount to a serious issue depending on the context in which it takes place. Here is everything you need to know about ‘quid pro quo’ and how you can deal with it.

What is Quid Pro Quo?

Keep in mind, this sort of thing happens legally every day, but the main difference is there must not be any malfeasance or bribery involved. The big takeaways for understanding what quid pro quo is include:

The key, or main component, to any quid pro quo, is sometimes called a consideration. A consideration can take many different forms, but the most common include goods, services, money, or even some type of financial instrument. In other words, a consideration is anything used to influence the other party’s decision making.

Why is Quid Pro Quo Important?

You may be wondering why quid pro quo is so important, but the answer is actually pretty straightforward. Without protections from illegal quid pro quo, there would be very little stopping individuals, the government, or corporations from using their power or information to coerce others into doing things against their interests.

As a side note, whenever you enter into a contract, you should make sure that you fully understand what will be expected of everyone involved. This is a good way to mitigate any potential ‘hiccups’ moving forward.

An Example of Quid Pro Quo

Depending upon the context of a given quid pro quo, there is a chance that it could have negative connotations. For example, take an investment bank’s research on a publicly-traded company. The bank may decide to amend its rating of what the company is worth. In response, the company may feel there is a conflict of interest present. They could then take legal action to protect themselves from being taken advantage of.

Another example of illegal quid pro quo is in the political realm. For example, if a business makes a substantial donation to a politician and they start making all their policy decisions in favor of that company, it could be a big sign of quid pro quo. Just try to keep in mind that any legal quid pro quo will have the needs of all parties involved at the very forefront of the agreement. Society is fundamentally built on the exchange of goods and services. But when things become this complicated, we need laws to prevent the little guy from being taken advantage of by those in a position to do so.

If you think that you may have been the victim of quid pro quo in the workplace, schedule a free consultation with one of our Human Resource experts. Contact us now.